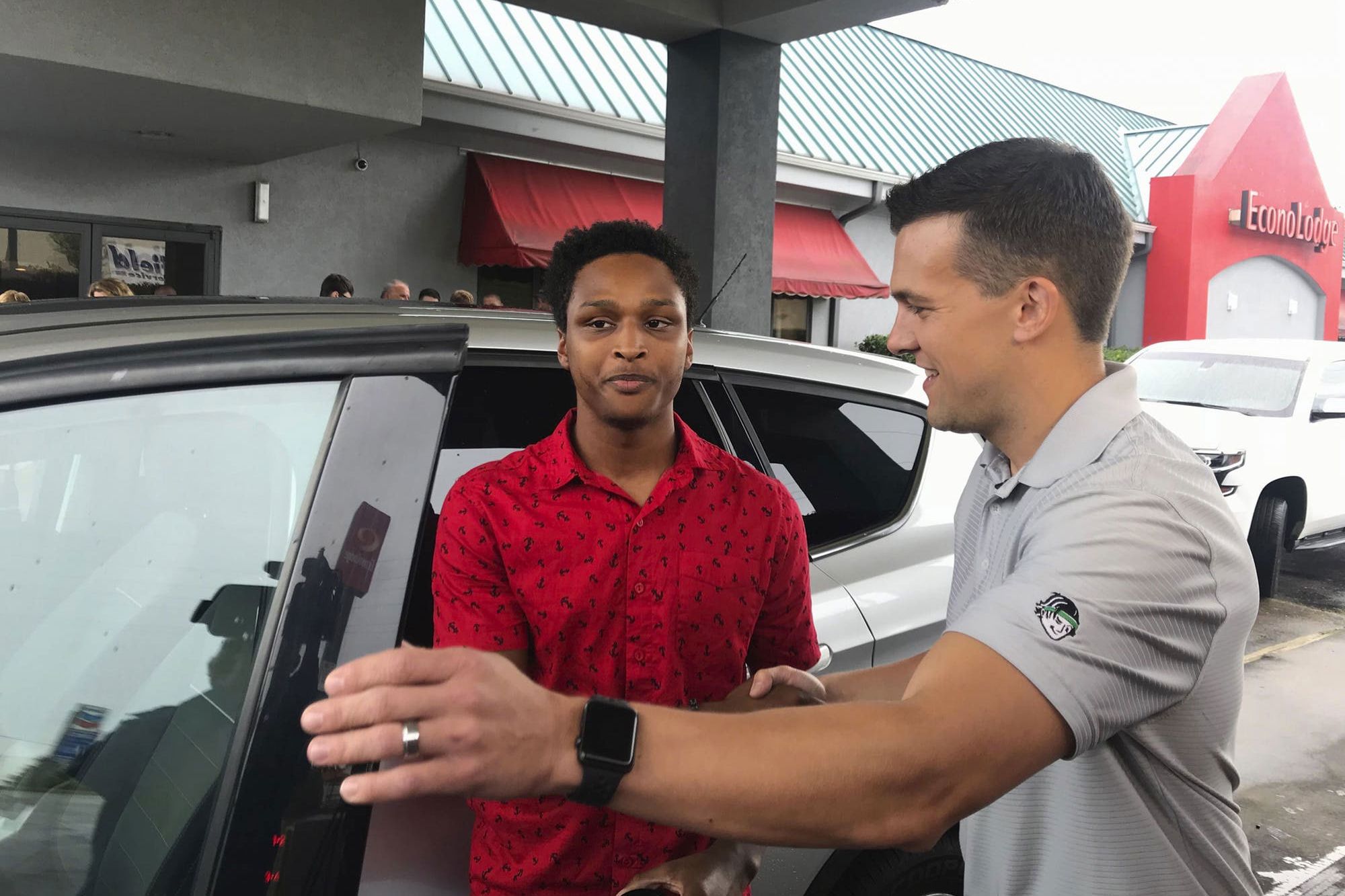 Did you hear about the guy who starting walking 20 miles to work and was rewarded with a car? Of course you did!

In the wee hours of a July Saturday morning, Walter Carr set out for his first day at a new job. Sounds like a pretty ordinary story, right?

Sure. Except for one thing. To get to that job, Carr had to walk 20 miles from one Birmingham, Ala., suburb to another. Yes, he walked.

You see, Carr’s car had broken down, and he couldn’t find anyone to give him a ride. What about public transportation, you ask? Let’s just say Alabamians aren’t blessed with a bevy of such options (as is the case with many of their Southern neighbors). So, Carr walked.

Starting out just after midnight, he left Homewood for Pelham, a 20-minute drive — or a five-hour walk. After trudging down the roadside a few hours, a Pelham police officer spotted Carr, pulled over, and asked where he was heading at such an odd hour. When Carr explained he was walking to his job, the police officer decided to drive him the rest of the way, stopping first to get him breakfast.

The job Carr walked to was as a mover with Bellhops, a young, VC-backed, tech-enabled moving company headquartered in Tennessee. And the customer, Jenny Lamey, after hearing about how he got to work — and being pleased with his work performance — shared Carr’s story that Saturday evening in a Facebook post for their friends to see. And no, she didn’t tag Bellhops.

By early Sunday morning, members of the Bellhops communications team, led by Kyle Miller, caught wind of the social media post and immediately got it in front of company leadership. The response was unanimous: They all wanted to do something for Carr. What, though?

You get a car!

Miller said they “threw around some ideas knowing that Walter needed reliable transportation more than anything, but also that we couldn’t buy him a brand new car,” given Bellhops’ startup budget.

That’s when CEO Luke Marklin decided to give Walter his own personal ride. “Later that day, Luke called me and said, ‘I am going to give him my car.’ I laughed, and then he said, ‘I’m serious. Let’s figure out what I need to do to give him my car tomorrow.’”

With that decision, Miller knew the story would attract some attention. Yet the amount of attention it generated was surprising. Almost unheard of, really.

Most communications directors for young businesses spend much of their time trying to figure out how to get media coverage. Rare is the occasion when the tide turns and managing a wave of media requests becomes an all-consuming task. That, however, is precisely what happened.

Related: 5 Reasons Why PR Is Important For Your Startup

Under the guise of taking Carr for coffee to say thanks for a job well-done, Marklin and some of the Bellhops HQ team drove from Chattanooga to Birmingham that Monday morning.

“We got everything lined up to give Walter the car in Birmingham,” said Miller. “We coordinated with the local police department and Jenny so that everyone could be there… and we sent out a media advisory to the local Birmingham outlets.”

The goal was to shine a spotlight on Carr, surprise him with a car, and help drive local donations to a GoFundMe account the customer had set up for Carr. Those turned out to be modest expectations.

“The first outlet to publish the story was AL.com, and as we drove back to Chattanooga, we watched the story spread,” Miller told me. “It went viral, landing on the front page of Reddit. At that point, it was clear that this was going to be a big story. We started prepping for inbound media requests, but we didn’t realize just how big it would get.”

PR as a team effort.

As the Bellhops team made the two-hour drive from Birmingham to Chattanooga, Miller began getting his team — as well as the rest of the company — ready for a possible flood of media outreach. To him, “the number one thing was to make sure we could respond to every request quickly and be able to anticipate the needs of each reporter. I feel like we did that really well.”

When it was all said and done, Carr was featured on most major broadcast and cable news television channels and was in more than 2,000 online articles worldwide.

Hindsight being 20/20, Miller said if he’d had more lead time “the big thing I would have done would have been making sure everyone had a clear role because events like the one we went through develop very fast and there is no downtime. Luckily, the team jumped right in, and everyone helped out a ton.”

Which gets to the three big takeaways Miller got from the experience.

Related: 7 Characteristics of Startups Built to Weather Any Storm

Once the tide ran out.

For Carr’s story to reach the masses, multiple people had to do the right thing.

He, of course, had to show his gumption to get to work; the police officer had to give him a ride (and feed him); the customer had to write a Facebook post; the CEO had to want to reward him; Miller had to help reporters tell the story quickly.

And if any of those variables didn’t happen, there’s a good chance my Airbnb host in Boston a couple weekends ago wouldn’t have said, “Bellhops, I know them. They’re the ones that gave the kid the car, right?”

In the fast-paced world we live in, Carr’s story isn’t in the headlines anymore. That’s to be expected. So, where is he now?

Carr is still a mover in Birmingham, easily the most popular. Bellhops gets regular requests that he be assigned to specific jobs, though no cameras are around anymore waiting on him to lug a couch into a U-Haul.

With that reality in mind, Bellhops didn’t want the past national exposure to simply be a wondrous blip on the radar for Carr. The GoFundMe account set up for him — with an original goal of raising $8,000 — surpassed $90,000 recently, and Bellhops connected him with a financial advisor to help him manage that windfall as he nears college graduation

That’s par for the course for Bellhops.

That spirit-inspired company leadership to reward a deserving Carr — it rallied an entire HQ team to help tell the world about him, and it makes it possible for another good media tsunami one day.

Pike-Inc September 11, 2018 marketing Marketing No Comments »
How to Charm Rejected Applicants Into Being Brand Ambassadors
Keeping up With the Ever-Changing Customer Means Updating Offerings and Taking Advantage of Technology