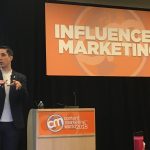 This statistic, via HubSpot, conveys all you need to know about the opportunity that LinkedIn video presents: Only 38% of marketers are sharing video content on the platform, even though three-quarters rate it as a successful tactic.

TrackMaven CEO Allen Gannett is a prime example of what success looks like with this relatively nascent feature. The name of his session at Content Marketing World, “How To: 0 To 1 Million LinkedIn Video Views in 6 Months,” understates achievement, as his videos have now amassed around 3.5 million views – all organic.

Fortunately, Allen delivered on the “How To” part, serving up a bounty of practical tips that marketers can apply right now.

Any time you see a new platform emerge, there’s usually a lot of opportunity very early on. – @Allen on #LinkedIn video at #CMWorld Click To Tweet

It Began with a Dream

As LinkedIn was gearing up to unveil its in-stream video functionality last year, Allen posted on his personal page about a (fairly weird) dream he’d experienced the previous night:

As it happened, LinkedIn CEO Jeff Weiner took notice of the post.

And with that, Allen was in. He’s spent the last 14 months or so building his #AllenAsks series into a big hit. Each video features very brief interviews that he’s conducted with fellow executives and prominent thought leaders. And he’s experienced very real business benefits including: Direct awareness and leads for his company, social proof for prospects, authentic recruitment of talent, speaking invites for him, and free promotion for his new book The Creative Curve.

In his CMWorld session on Wednesday, Allen shared the inside scoop on his formula.

The inner workings of LinkedIn’s feed algorithm can seem mysterious, but you may not be aware (I wasn’t) that the company shares details about it quite openly. By perusing this post on the LinkedIn Engineering Blog, you can learn a great deal about how and why certain posts are prioritized on user feeds.

The LinkedIn algorithm evaluates content on these factors, among others:

These influences are important to understand, but obviously they’re not secrets, and are largely intuitive. The real meat of this presentation came from Allen’s own personal findings.

You want to provoke those #video comments, so people get in there and have a conversation, then #LinkedIn starts sending them more of your content. @Allen #CMWorld Click To Tweet

In addition, these sharing tactics have helped Allen drive the tremendous traction of his LinkedIn video series:

One might be compelled to post B2B videos from a Company Page, but such updates inherently get less reach than those coming from a personal profile. Also, content tends to make a much bigger impact on audiences when it originates from a human rather than from a brand.

“’We’re living in an age where authenticity is key on social media,” he notes. “People want to hear stories from individuals.”

Rally your employees or company leaders to leverage their own LinkedIn presences, and you’ll see much stronger results without the need for paid amplification.

This is vital. The ultimate reach of LinkedIn content is largely dictated by its performance right after being published. Allen tries to drive as much engagement as he can within the first 60 minutes after he posts a video, even if it means texting a bunch of friends and asking them to click “Like” on it. One could also send out an email or Slack message to their coworkers with the same intention.

Connect with 2nd- and 3rd-Degree Connections

When you see people you aren’t yet connected with on LinkedIn quickly liking or commenting on your video, reach out with a connection request. This will grow your base audience going forward, helping to bolster that crucial early engagement for future content.

Don’t worry about striking people the wrong way, Allen urges. “The reality is that if someone’s going and liking your content within the first five minutes, they probably want to be your LinkedIn friend.”

LinkedIn’s feed only displays one piece of content from a creator at a time, so make sure to space yours out. Allen suggests posting videos five times per a week at maximum, and no more than once per day. If he sees a post doing particularly well, he’ll hold off on posting anything the following day to let it breathe and grow.

You’ll have a harder time appearing on feeds if you’re posting at the same time as everyone else. Ideally, you’ll want to add your video at a quieter time (say, very early in the morning) so that it’s already picked up steam by the time a majority of members are browsing the platform.

Don’t lean exclusively on video. Allen has found that the LinkedIn algorithm can ding you for posting too much of the same content type, so be sure to mix in images and text-based posts as well.

It’s a good idea in general to include captions in videos created for social media, and especially on LinkedIn. Since people are often viewing at work, it’s all the more likely they’ll be doing so with the sound turned off. Allen offers up a few options for adding subtitles to your video content:

Don’t Wait to Get Rolling

Allen’s parting advice came with an especially strong emphasis: Don’t hold off on applying these recommendations and putting your LinkedIn video strategy into motion. Visibility is easiest to achieve here in the early stages, with fewer creators to compete with. “Don’t be asking yourself in five years when B2B YouTube blew up,” he implores.

If (#LinkedIn video) is interesting to you, this is something to start tomorrow. Because it’s going to get harder as more people start to do it. – @Allen #CMWorld Click To Tweet

The opportunity is ripe. And now, we’ve got the necessary information to take advantage. Thanks, Allen!

Stay tuned for more #CMWorld coverage and insights on the TopRank Marketing Blog. In addition, follow myself and the some of our on-the-ground team members on Twitter at: @TopRank, @leeodden, @azeckman, and @janebartel.

Pike-Inc September 6, 2018 marketing Marketing No Comments »
Bucking the Trend, British Supercar Manufacturer McLaren Will Not Build an SUV
The Secrets to Scaling Your Business