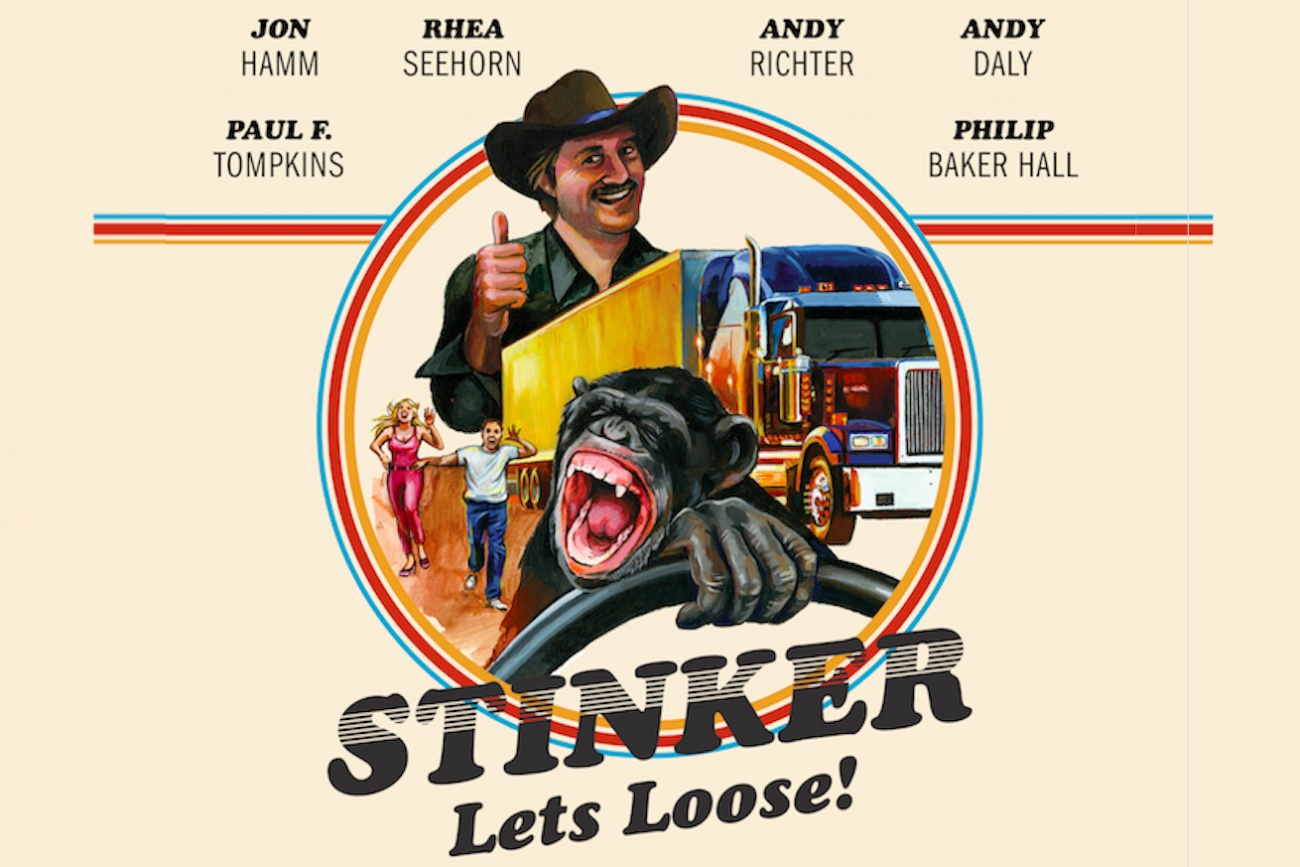 You might be slightly baffled by the premise of the hilarious novel Stinker Lets Loose!, and its author is completely OK with that. “I kind of like the confusion because I think there’s too much explanation in the world sometimes.”

Against the author’s wishes, we’ll try to explain it anyway. Stinker Lets Loose! is the novelization of a 1977 classic trucker movie about a renegade trucker and his mischievous chimp tasked with delivering a six-pack of beer to President Jimmy Carter. (Think Smokey and The Bandit meets Every Which Way But Loose meets the most insane fever dream you’ve ever had.)

So here’s the thing: the movie that this book is based on doesn’t exist, nor does the book’s author, James Taylor Johnson. The entire project is the work of comedy writer Mike Sacks (who definitely does exist — see evidence here.) Sacks conceived Stinker Lets Loose! as a two-for-one send-up of two things near and dear to his heart: trucker movies and the fantastically bad genre of movie novelizations. “It was just something I wanted to do to amuse myself and my friends,” he says.

Pretty impressive results for something whose main goal was to be “intriguingly bad.” Entrepreneur spoke with Sacks about what it takes to make your idea a reality, even when everyone — including yourself — is asking, “What the hell are you doing?

Get fueled by your anger.

“I’ve been writing comedy for magazines and books for a long time. And I was just kind of tired of the hustle, tired of working on ideas I wasn’t crazy about and definitely tired of trying to come up with Trump jokes at midnight. I was paid for my work but I wasn’t happy with the final product. I had a particularly bad experience and I thought, ‘Fuck it, I’m going to do what I want, how I want to do it.’ In no way am I comparing myself to geniuses like Richard Pryor or George Carlin, but people like that go through a schism — they break from what they are doing and not happy about and just let themselves free and do whatever they want. And that’s when people really succeed. You really do have to follow your inner compass and lodestar.”

Related: 5 Things This Self-Published Author Did to Sell Over 20,000 Books With Almost No Money

Be prepared to totally freak out.

“I wrote Stinker Lets Loose! in six months. Some nights I would be sitting there struggling on a scene — a garbage scene for a garbage book — and think, ‘What the hell am I doing?’ I thought I should be working on other nonfiction books, I should be interviewing people. But as tough as it got, I learned that there’s a real difference between struggling through your own project vs. struggling through someone else’s project. It’s like smelling your own child’s diaper vs. another child’s diaper. Your kid’s diaper is going to smell fine no matter how bad it gets.”

You can find the time if you really want it.

“I have a full-time job, and to find time to do this I had to make sacrifices. One of the things I gave up was TV. I realized I would just sit there scrolling around for two hours trying to find something to watch. Giving up TV freed up a lot of time and I found that the more I wrote, the more I wanted to write. It becomes addictive to create. You get sort of a high from it.”

Abandon the way it is supposed to be done.

“My agent wanted no part of this project, which I understood. I’ve written several nonfiction books and published through the traditional route, but I decided to publish this under my own imprint, Sunshine Beam Publishing. There are so many layers and levels to get through when you go the traditional route. Even after your book gets accepted, it will take two or three years for it to come out, which is ridiculous. My girlfriend is a designer and she created the amazing cover and I took on the marketing, which honestly an author has to do even if they are going the traditional route. I had a very specific vision for this, and I knew I would have to do it myself to achieve it.”

“You become stagnant if you work on the same project for two, three, four or five years. Time and time again when I’ve interviewed writers and creators for my nonfiction books like And Here’s The Kicker, people say that it’s never going to be perfect and at a certain point you have to pull the trigger and release it. You really do have to propel yourself.”

“When I finally put the book out it was met with total dead silence. That was my darkest ‘Why did I waste six months doing this?’ moment. But over the years, I’ve collected the emails of about 5,000 friends and people in the comedy world and sent out an email asking them to check it out. It’s not a huge list, but it is all people who are comedy geeks and have a high comedy IQ — the audience for this book. Working at Vanity Fair, I see every day how much time and money is wasted sending books out in an untargeted blast. A few weeks after I sent the email, people starting buying it and getting back to me about how they liked it. That’s when I sort of breathed a sigh of relief like, ‘OK, at least they get it.'”

Be open to help.

“The guy behind the audiobook is Eric Martin. Two weeks after the book came out, he connected with me and said he thought it was really funny and asked if he could turn it into an audiobook. I said sure, it’s all yours. I wasn’t really thinking much would get done because over the years I’ve had a lot of people say they want to do something and it never comes to fruition. But this guy ran with it. He sold it to Amazon Audible, which is big deal, narrated it and enlisted 30 actors to play all of the parts. It turned into an audio movie, really. I was just blown away by what he accomplished. It really was just a stroke of luck to have him get the sensibility so perfectly — it was incredible really.”

“I don’t think writing should be seen as mysterious and scary to those just starting out. I think you just have to put yourself out there. There are so many online platforms where you can find out what works and what doesn’t work. If you have talent, no matter who you are, you could potentially be read by as many people who read a story in The New Yorker. It’s an amazing opportunity and it’s all possible. If you have talent — no matter who are — you can do it and I think that’s a good thing to know.”

Pike-Inc February 14, 2018 marketing Marketing No Comments »
5 Productivity Hacks to Bring Content Creation From Failing to Flying High
EMaaS: How Email Marketing Can Be Your Agency’s Most Profitable Service