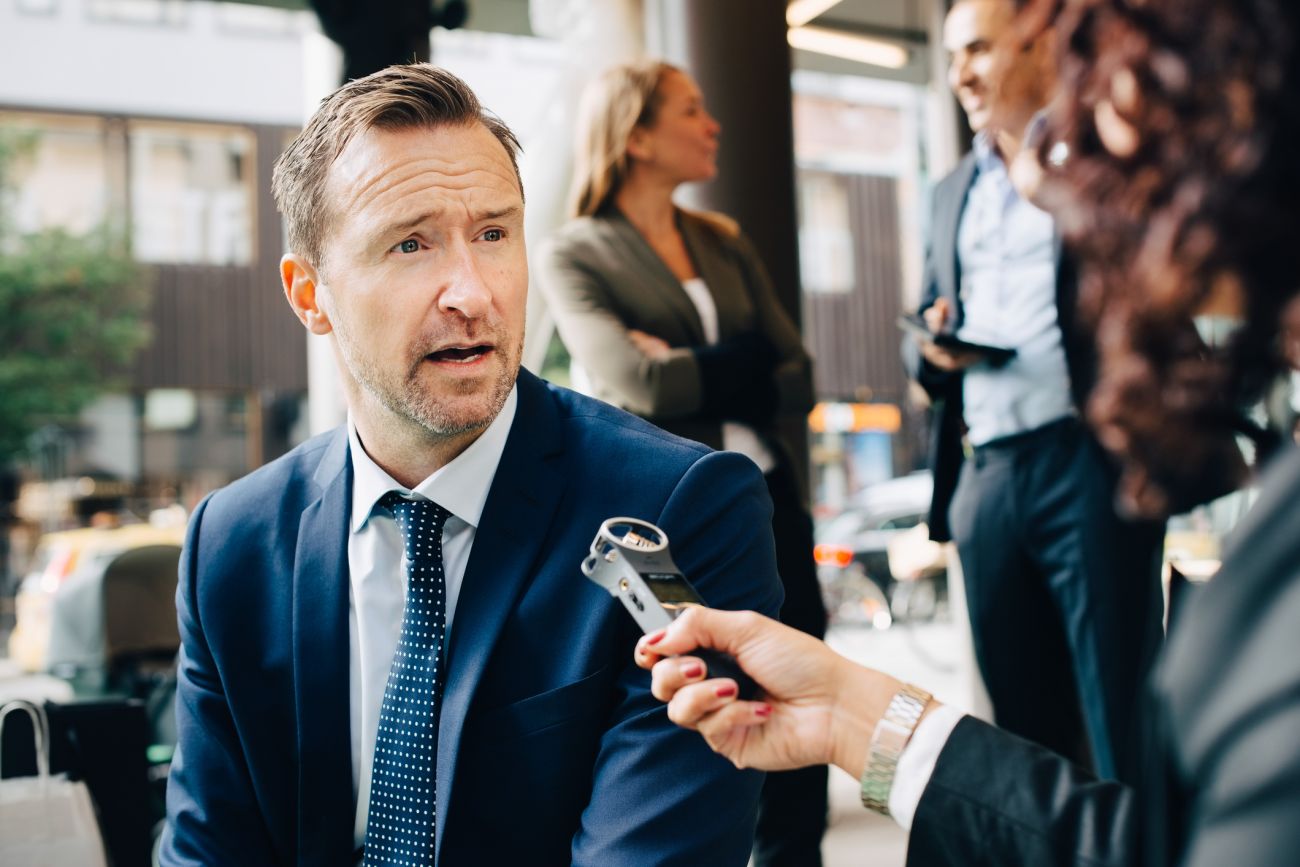 It’s natural, we all do it — insert little placeholder words to buy time to finish forming a sentence — but media time is precious for increasing your company’s visibility. Train yourself to become a good interview.

When you’re doing media interviews it’s easy to say “um” and “ah” (or other similar words such as right, yeah and ya know) a lot of the time. The way to stop is to become aware when you’re saying them during normal conversations.

Here are three tips that will help you break the habit to make you a journalist’s ideal guest.

Put a Post-It note on your computer or your phone that says the words um and ah (or the words you’re wanting to stop saying) with a red line through them. This will help make you aware when you’re about to say these words.

You’ll notice that presenters and talk show hosts do say “um” and “ah” from time to time. In fact, they can actually make an interview seem more natural, so don’t worry if you, too, say them here and there. In fact, worrying about saying them will probably make you say them even more — the intention is to become aware so you don’t overdo it!

2. Talk to yourself in the mirror.

The aim here is to look at yourself in the mirror while talking out loud. Why? Because it’s a great way of getting used to hearing your own voice and create awareness around the words you’re saying. If you think that’s a bit weird, there’s more! I also suggest that you talk to yourself in the shower, in your car and when you’re alone. If you’re walking down the street and no one is nearby, talk to yourself there, too!

It may sound a bit strange, but it’s a great way to get used to hearing your speaking voice, which will make listening to yourself on radio or TV more enjoyable and stop you from being self-critical. It also gets you to focus on the words you are speaking; so yes, I’m actually saying you need to talk to yourself! And if the men in white coats knock on your door, just give them my number and I’ll explain everything!

Related: 3 Ways to Handle That Media Interview Like a Pro

What do you talk about?

The best practice here is to ask yourself questions and to reply as if someone else is there. During this time use facial expressions and be dramatic, talk with your hands and move your head and body. Being interviewed in the media is show business, and you are going to be a guest on someone’s show regardless whether it’s a publication, a radio show, a podcast show or a TV show.

When you start practicing alone, it doesn’t really matter what you talk about. You could talk about what you’re going to do today or what you did yesterday. You could also talk about something you’re excited about or what you’re angry or passionate about. Remember to use your emotions; how does this topic make you feel? Create some drama, talk fast and then slow it down. Talk loudly, and then speak softly. Remember to use facial expressions and move your hands and body. Listen to yourself; do you often say “um” and “ah”?

Related: 10 Credible Ways to Show the Media You’re an Expert Worth Interviewing

When you’ve spoken about everyday events for a few days, then move on to the topics that you would like to be interviewed about. Let your passion shine through and be animated. What opinions do you have about what’s hitting the news, what advice would you give in an interview? Remember also to tune into your lighthearted and playful side, tell yourself a funny story and then laugh out loud.

I understand this all may seem a little unusual, but this is great media training and will set you up to give calm, confident and powerful media interviews.

How often should you do this?

I recommend you do this practice daily, that way you’ll get used to hearing yourself talk, you’ll be comfortable hearing your voice and your pace and tone will become engaging to anyone listening. You’ll also become aware when you’re saying “um” and “ah,” which helps you choose to stop saying them.

If you’re someone who spends a lot of time on your own during the day, which can often be the case for entrepreneurs, you won’t be speaking out loud very often. If you talk out loud to yourself using positive, powerful and passionate words and emotions on a daily basis, it won’t be such a shock when you’re holding a media interview or listening to yourself on a recording.

If you can practice reading stories to children, your audience will force you to learn to talk in an entertaining way. You will notice that your pace, tone and inflection will change as you read aloud. You will naturally talk louder and softer, and you will take on different characters in the story — if you don’t, the child will get bored and will not be shy about letting you know! This is another great way of getting used to hearing your own voice and creating awareness around the words you’re using to express yourself.

So now it’s your turn! Giving regular media interviews can transform your business. But here’s the thing: Journalists are not just looking for experts who are knowledgeable in a particular area, they’re also looking for experts who can entertain their audience. Follow these slightly wacky and outside-the-box tips, and you’ll be both educational and entertaining, making you an ideal guest for any journalist!