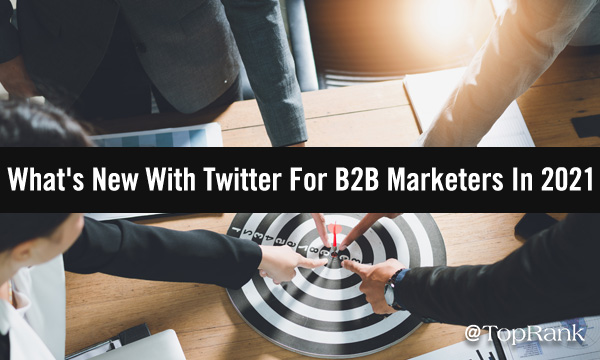 With more than 199 million active daily users and available in over 40 languages, Twitter has continued its growth as a platform for both B2B and direct-to-consumer brands looking to creatively showcase products and services.

When it comes to new feature launches, Twitter has ramped up its pace, helping it make significant gains as a social media platform not just for consumers, but also for a greater number of professional business users than ever.

Let’s take a look at seven of Twitter’s most recent feature roll-outs, changes, and announcements of forthcoming offerings, with an eye towards how B2B marketers can use Twitter in new ways .

Twitter recently began testing more visible integration of its forthcoming “super followers” feature — which will allow brands and creators to offer subscription-only bonus content on the platform — with a new super follower count that is likely to appear alongside the traditional standard account follower numbers.

Brands will likely be able to provide subscriber super followers with exclusive content in the form of:

Subject matter experts (SMEs) and B2B influencers alike could also look to super followers as a way to provide exclusive perks to their followers.

SMEs could also become super followers of the brands they co-create content with or otherwise support, which would likely bring with it a visual super follower support profile badge, helping to lend an additional degree of authority to brand and influencer collaborations and how they use Twitter to tell stories together.

For the first time since November, 2017 Twitter recently began allowing users to apply for verified profile status and get a blue check-mark — a status mark that only less than one percent of its user accounts presently possess.

The response, however, proved to be overwhelming, causing Twitter to temporarily pause profile verification requests after just over a week.

As the new option began rolling out recently, a verification application option had appeared within Twitter user’s account settings — an option that is now on hold as Twitter re-groups and considers new plans to re-open the process.

Twitter has noted that the verification pause is temporary, and has stated that it plans to soon re-open requests from brands and the public.

A blue check-mark is only one element to consider when seeking to build brand trust, and Twitter will need to tread lightly as it resumes its verification process, so as to avoid over-approving the mark, or making it too difficult to qualify for.

That may be changing, however, as certain Twitter feature researchers and observers have noted recent tests which could see a range of new reaction options arrive for users, such as expressions of cheers, joy, and sadness.

Such reactions could help brands more effectively learn how their audiences are interacting with the content they tweet on the platform, beyond the currently available simple metric of “likes.”

How Twitter rolls new reaction options into its mix remains to be seen, and one option would be to include additional reactions in a subscription version of Twitter, code-named Twitter Blue among some industry observers.

A Twitter Blue subscription offering has been viewed by some Twitter observers as likely to contain an array of potentially enticing new features, possibly including:

Twitter may have its work cut out for itself should it follow through with a premium subscription offering, and B2B brands will be especially keen on finding out which exclusive features a Twitter Blue can offer them.

Twitter has traditionally taken a slower-moving route to making large changes to a smooth system that many see as working well due to its simplicity, however as we noted earlier, the number of new features and future change tests have increased, especially over the past several years.

It’s upped its acquisition game lately as well, with additions such as Scroll and its media subscription options, and newsletter-centric Revue, among others.

Diversifying Twitter stems from the firm looking to offer variety when it comes to communication on the platform, and an expanded version of Spaces may be key in those forthcoming efforts.

These and other efforts are aimed at attracting more brands to Twitter, and allowing them to offer more interactive and complete campaigns.

Top reasons brands that haven’t already taken to Twitter should do so, according to David Wilding, head of planning at Twitter UK, include better connection and launch opportunities.

“It’s simple, there are two reasons; one is to launch something new, and the other is to connect with what’s happening,” Wilding recently noted.

Advertising opportunities on Twitter — especially video ads — include several that take over the first promoted ad spot displayed on a user’s timeline, along with others targeting Twitter trends feature.

Twitter has tested a communities feature that would allow brands to share content to specific groups of their followers — a shift away from Twitter’s traditional publishing method that is usually sent to all followers.

Twitter Communities would allow brands to target sub-groups of their Twitter followers, a particularly attractive proposition for large B2B brands with hundreds of thousands or even millions of followers.

Twitter’s recently-launched tip jar feature — which allows users to monetarily support the Twitter accounts they follow, is another change the firm has implemented in efforts to increase the amount of time users spend on the platform, by providing a service that previously was often conducted outside of the Twitter environment.

Twitter has also made efforts to offer dedicated business profiles on its platform, testing additional B2B-friendly features such as more business details and service information.

When finalized, brands will likely have a slew of new business profile options to take advantage of, such as:

In the meantime, successful B2B brands keep their Twitter profiles current and utilize those features already in place, such as Twitter lists, which we’ve explored in, “Why Twitter Lists Are Still a Great Tool for B2B Marketers.”

These are only several of the numerous changes Twitter has been testing, however we hope that looking at these seven has provided you new ideas for your own B2B marketing efforts on Twitter.

Looking for award-winning help with brand Twitter strategy and much more? Contact us today and find out why top brands from LinkedIn and Dell to SAP and Oracle have chosen TopRank Marketing to create award-winning B2B marketing.

Pike-Inc June 2, 2021 marketing Marketing No Comments »
How to grow your business from your cell phone
Simplify Your Marketing And Grow With Less Stress