Ads are everywhere. Not only do they fill web pages, social networks and app screens, they’re also found on many surfaces in the real world, including on billboards, trash cans and even subway turnstiles.

A recent campaign for Capital One will be found in 10 million cookies distributed by 5,000 Chinese takeout restaurants over the next several weeks. The ad has already rolled out to customers of 10 restaurants. It wasn’t long before the stunt-like promotion hit the web.

Ben Kaufman, a serial entrepreneur who now works at Buzzfeed, found the ad in his post-meal cookie, then tweeted about it. His tweet was liked more than 10,000 times, then someone posted his photo to Reddit, where it received more than 32,000 upvotes.

Related: How This Food Startup Built Its Business by Avoiding Retail

The whole campaign is the work of OpenFortune, a marketing startup that — you guessed it — creates creative ads for clients through the medium of fortune cookie fortunes (a similar idea has actually been done before and even Robert Kennedy put campaign ads into cookies in the 1960s).

“We’re taking an American icon and putting a spin on it,” says Matt Williams, who joined the company in 2016. 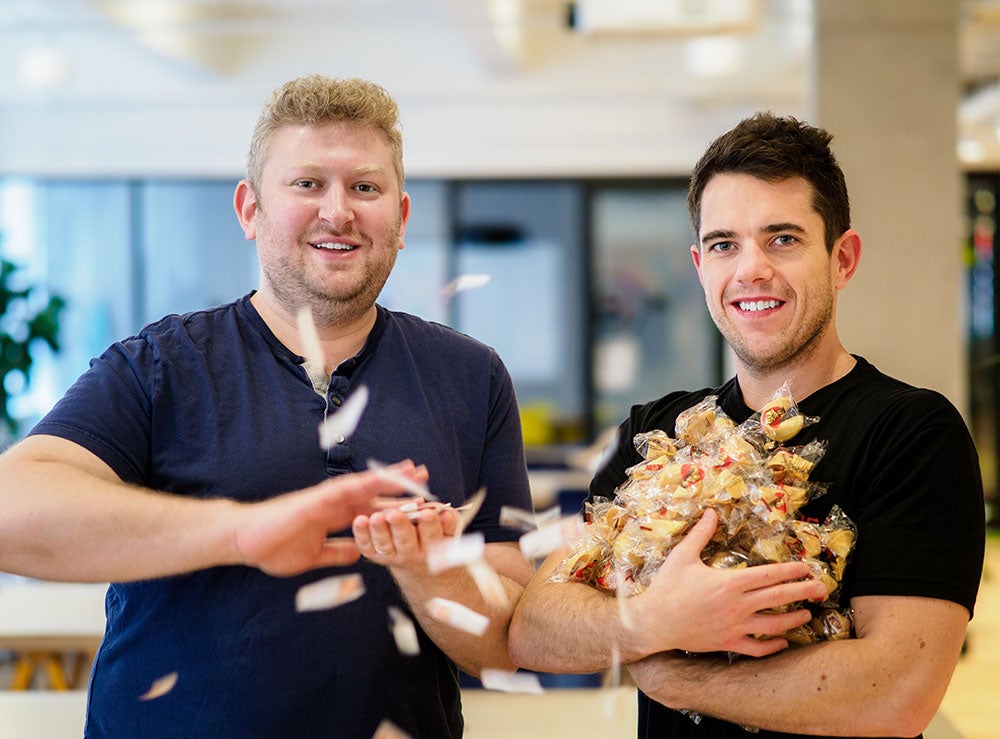 The concept to put ads on fortunes was a seven-year effort for the company’s founder, Shawn Porat. The entrepreneur, who had previously founded JudgmentMarketplace.com (he sold a majority stake in the company), had been eating Chinese takeout in late 2010 and saw people at the next table interacting with their fortunes — reading them to each other and taking pictures. He then had the idea to put his website’s URL on the slips of paper. The effort led to a boost in traffic. So Porat went about setting up a company with the on-the-nose name Fortune Cookie Advertising and reached out to advertising agencies and potential customers. Most hated the idea, he said.

“They said, ’55 cents per cookie? Are you crazy?” Porat recalls.

But he endeavored on, and landed customers including TJ Maxx and Bloomingdales, both of which handed out cookies to customers with promotions inside. In 2014, he landed Missouri Lottery as his first client to adhere to his original vision, advertising inside 1 million cookies at Chinese restaurants in that state. The campaign ended up a success, he says.

Porat knew he was onto something, but he admitted that he didn’t know the advertising world well. So in 2016, he partnered with Williams, who had previously launched a company that put ads above urinals. Paul Sethi, founder of Redbooks, also invested in the company, which rebranded as OpenFortune.

The company, which employs four full-time and four part-time employees, isn’t just resting on a novel idea. It developed a proprietary printing set that allows the fortunes to include color and graphics using edible soy-based ink. It also signed exclusivity deals with the cookie factories it works with. But, Porat and Williams says, everything depends on creativity.

“We’re not looking to be a stunt or some PR blitz, we’re looking to have longevity,” Porat says. “It’s always going to be fun so people embrace the advertisement.”

Each campaign, Porat and Williams say, will have at least 100 different fortunes, tailored for the client’s category. For example, one fortune in the Capital One campaign reads, “Don’t be afraid to ask life’s big questions” along with the lucky numbers — typical fair for a fortune cookie. On the other side is the ad copy, but with a question above: “Spicy or Sweet and Sour?” Sure, that may elicit groans, but it’s fun and light enough that people may forget they’re being advertised to.

Part of OpenFortune’s appeal is its network of 19,000 Chinese food restaurants, about 45 percent of the U.S. market, the founders say. As to what the eateries get out of it? Clients can can subsidize the cost of production so restaurants pay a reduced price for them. The other option is clients pay for the production of cookies outright and have them distributed in specific geographical areas, in which case the restaurants get the cookies for free. That latter option costs at least five times more.

Related: 6 Entrepreneurs Share the Brilliant, Crazy Ways They Took Their Companies From Pennies to Profit

OpenFortune’s rates start at as low as a penny per cookie, and the founders say they’ve already partnered with some big-name clients in industries including consumer packaged goods, travel and finance, but couldn’t share names, due to disclosure agreements. Several clients have also asked if they can have exclusivity in their category, say one specific car company being the only one to work with OpenFortune for a year. Porat says the company is more than halfway booked for 2019.

After almost a decade, that’s a sweet turnaround for Porat, who says the same people who rejected the idea years ago now tell him that it’s a “game changer.”

Pike-Inc August 27, 2018 marketing Marketing No Comments »
The Top 200 Franchise Brands People Love the Most
Words of Wisdom: Lee Odden’s Top 9 Insights on How to Succeed at Influencer Marketing 2.0