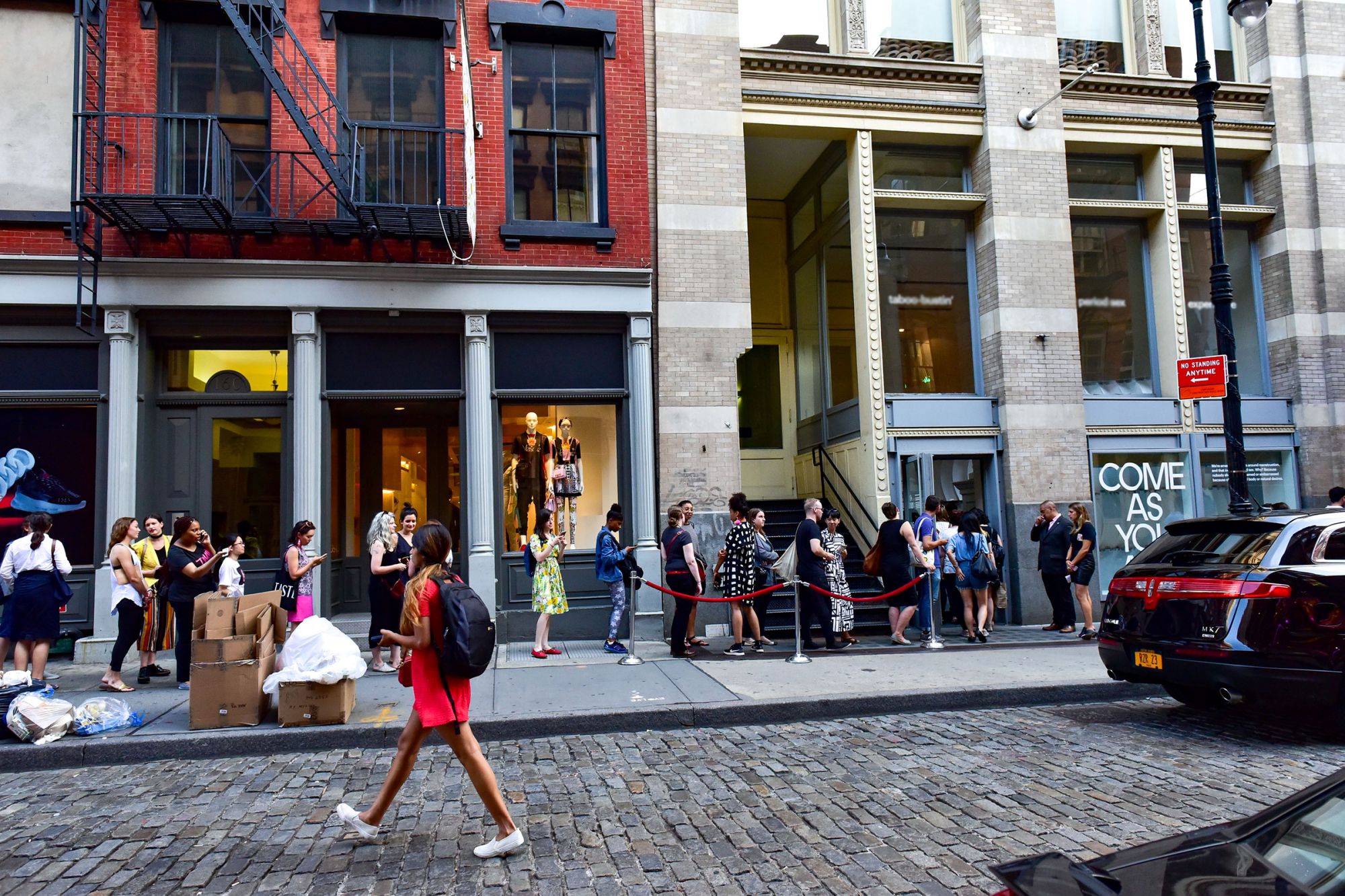 The first thing you need to know: A pop-up isn’t about stocking shelves and hoping people browse. It’s about attaining a ‘wow!’ status.

Interesting, the Oculus pop-up was arranged Foot Locker store style,to give browsers the opportunity to try the device rather than instantly buy it. Sure, eMarketer predicts ecommercewill exceed the $4 trillion mark by 2020; but, as a Retail Dive survey showed, nearly two-thirds of consumers remain leery of this consumer channel:

They want to physically experience merch before handing over their hard-earned cash.

Hence, Facebook gambled, not on its core platform but on the expectation that die-hard, wannabe Facebook and VR fanatics would share their experiences on social platforms, bringing awareness, hype and, eventually, sales, to an emerging product.

Not surprisingly, that was, and is, one smart bet.

What makes a temporary pop-up store such a powerful differentiator? In a nutshell, it’s tactile products. Forget that people are buying stuff online; they still appreciate a solid in-person demo. Plus, a well-managed pop-up is an intriguing prospect: No basic retailer can match the energy, intensity or uniqueness of a fleeting pop-up that’s literally here today, gone tomorrow.

Besides, pop-ups make odd or brow-furrowing products easier to understand. For example: A beeswax alternative to Saran Wrap? It’s tough to envision that product’s inherent value unless you see it in action and get answers to your questions, face to face from an expert.

Related: Why Now’s the Time to Open a Pop-Up Store

Ultimately, pop-up stores raise brand awareness and generate loyalty. At the same time, they aren’t the place to make sales — they’re marketing events engaging brand loyalists who love the company’s message and want to interact. Sure, new influencers are bound to stumble upon pop-ups, too, but the truest emotional connections come from people already knowledgeable about the product line.

For example, a Harry’s pop-up shop’s purpose wouldn’t be to introduce guys to its razors. How many would care? Even more important, why would they switch? The pop-up, instead, would be to magnify Harry’s branding by creating an experience for people curious about why they should use its products.

An ideal Harry’s pop-up would offer haircuts, shaves, hipster drinks and other memorable experiences. After getting the best shaves of their lives, super fans would head online and do some organic referral work to spread the brand’s message.

In response, people who trusted those influencers would head out to the pop-up sooner rather than later, worried they’d miss the fleeting chance to see the fuss. Their actions would be all-too-human, according to Shopify: Individuals routinely flock to scarce, novel opportunities. The reason: FOMO is a powerful fource.

Eager to get started on your own pop-up adventure? One that gets tongues wagging and fingers swiping? Before you pitch a pop-up tent on the corner green next week, pull in the reins. Pop-up shops require some serious forethought and planning.

1. Choose a location that caters to your audience.

When our company put up The Nest pop-up to showcase many of our clients’ brands, we picked a place where our target personas hung out: Abbot Kinney Boulevard, in Venice, Calif. It’s known nationally as one of the country’s most expensive retail streets, putting us in front of the sophisticated, high-end community our brands serve.

Related: Why Amazon Added a Pop-Up Loft in NYC

After picking the locale, we used the pop-up to highlight a series of rotating brands. At the same time, we kept the atmosphere fun by serving healthy vegan popsicles, playing great music and consistently engaging with visitors. The idea was to create a complete experience from beginning to end, catering solely to the people we wanted to impress.

Your pop-up should be similarly based on your ideal visitors’ profile, whether that might mean a twentysomething socialite or a hip baby boomer. When you know your audience, you can arrange a locale that fits. From that point, you should create landing pages and send emails to your hottest buyers. Take advantage of organic shares and ad-targeting, along with Facebook event-creation and retargeting. Your goal? Pack your launch party (and every day thereafter) with eager faces.

2. Ditch anything that doesn’t elicit a “wow!”

Say it with me: “experiential.” That’s the pop-up mantra. Your only job is to provide a huge, memorable experience. Forget about stocking shelves and hoping people browse — this isn’t How to Run a Lame Mall Kiosk 101.

For instance, when Target set up CityTarget, its Chicago Millennium Park pop-up, the store wasn’t like a typical suburban big box store: Instead, it offered commuters special CityTarget coffee and a few tchotchkes. One morning, CityTarget even set up a spin class. Another day, kids created CityTarget-logo-ed kites from scratch. Its final event? A launch for the full-store version of CityTarget for VIGs, or “very important guests.”

To attain “wow” status, map out every second of the pop-up flow (from the amplified, hyped launch party to the fireworks-inducing last moment). Keep the momentum going with live day events: Workshops, speakers and guest appearances keep the days hopping. Oh, and don’t forget to have a dedicated iPad to capture visitors’ emails and send instant welcome drips.

Pop-ups are temporary, but impressions are lasting if you re-engage your guests. The Nest lasted three months, and it wasn’t a profitable up-front endeavor. However, we set out to monetize it later by treating it as a marketing exercise to broaden our clients’ brand scopes and widths. By following up, we ultimately made money down the line.

Of course, some pop-ups buck this trend. Toms Shoes is a great example: It started as a fleeting project and ended up becoming a permanent hangout spot in Abbot Kinney. People hang out, work, drink coffee and occasionally buy Toms merch. Still, don’t rely on an immediate profit. The Marc Jacobs pop-up dedicated to its Daisy fragrance sure didn’t. To the contrary, it allowed people to use “social currency” in the form of #MJDaisyChain on Instagram and Twitter.

The way to make money is by taking the valuable connections you make and turning them into evangelists. Reach out via email and thank those who shared social photos. Then, send out coupons to anyone who missed your pop-up.

You don’t have to be Facebook or Target to get significant foot traffic and loyalist love from a pop-up store. All you need is the right location, a solid planning team and a strong after-event marketing plan. Now get out there and make some brag-worthy experiences for your target audience.