The people burning their Nikes weren’t buying many shoes anyway but those who support the ad are the people Nike anticipates will buy shoes for decades to come.

On the 30th anniversary of the iconic Just Do It slogan, Nike released an advertisement featuring a black-and-white image of Colin Kaepernick with the text “Believe in something. Even if it means sacrificing everything.” Within minutes, social media was abuzz with reaction. The ad went viral.

The social media firestorm was a mix of praise and criticism towards Nike. Some applauded the company for taking a stand while others went so far as burning their Nike apparel to start a #BoycottNike movement.

An ad that causes (previously) loyal customers to burn the company’s products is rarely called a success, but with Nike few things are ever that simple. Nike must have known that hiring the face of the most controversial movement in the NFL was going to cause an online maelstrom. So why take the risk? Why set yourself up to lose an entire demographic?

Because that group never mattered to you anyway.

By looking at the online conversations surrounding Nike and their Kaepernick ad, we can see that Nike knew exactly what they were doing. Was it a calculated risk? Sure, but with the emphasis firmly on “calculated.”

Related: 5 of the Most Controversial Ads in Recent History

Surveys show that younger, liberal audiences prefer companies to take a stance on important issues. Nike’s core audience is disproportionately young and more liberal than average, so the brand had good reason to believe that a bold, politically-minded ad would ultimately have a positive impact on its core audience.

But this is only the beginning of the story. By looking at social media audiences discussing the campaign, and Nike’s conversation overall, we can go further than the surveys to showcase how brilliant the marketing move truly is. Looking at the general Nike conversation, Nike’s core audience is young, with only 25 percent of people discussing Nike online being 35 or older. 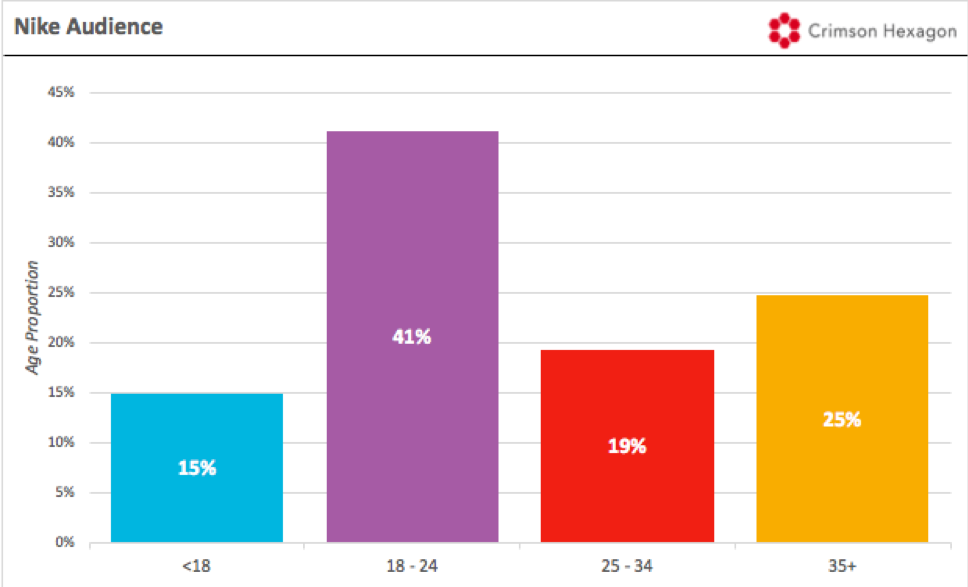 And when it comes to their main interests, the Nike audience is much more interested in youthful topics like high school and snapchat. 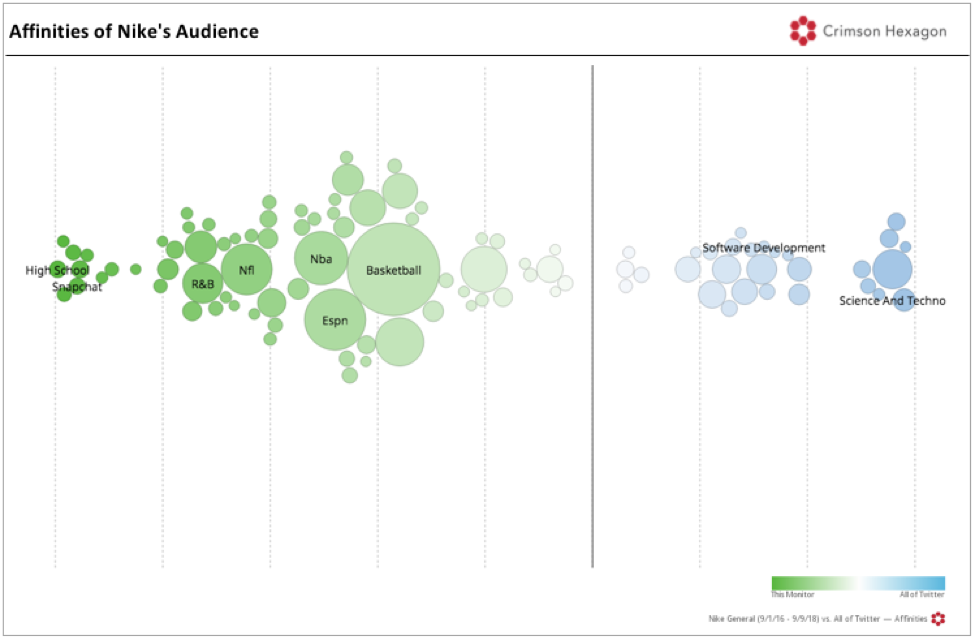 The rest of Twitter is much more interested in science, technology and software development, less relevant topics, but common to older audiences.

Comparing Nike’s audience to the groups of consumers positively and negatively posting about the Kaepernick campaign reveals something fundamentally important: the people who spoke positively about the ad were much more in line with Nike’s target audience. 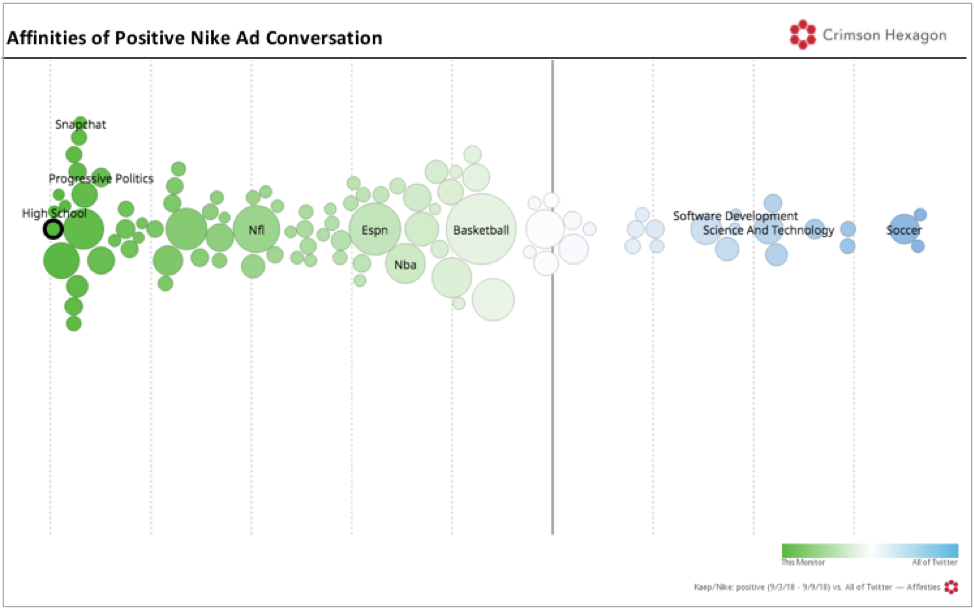 The audience affinities for those positively discussing the campaign perfectly line up with the same affinities of the general Nike audience. High school and snapchat interests confirming their youth, and the older topics that don’t interest them. 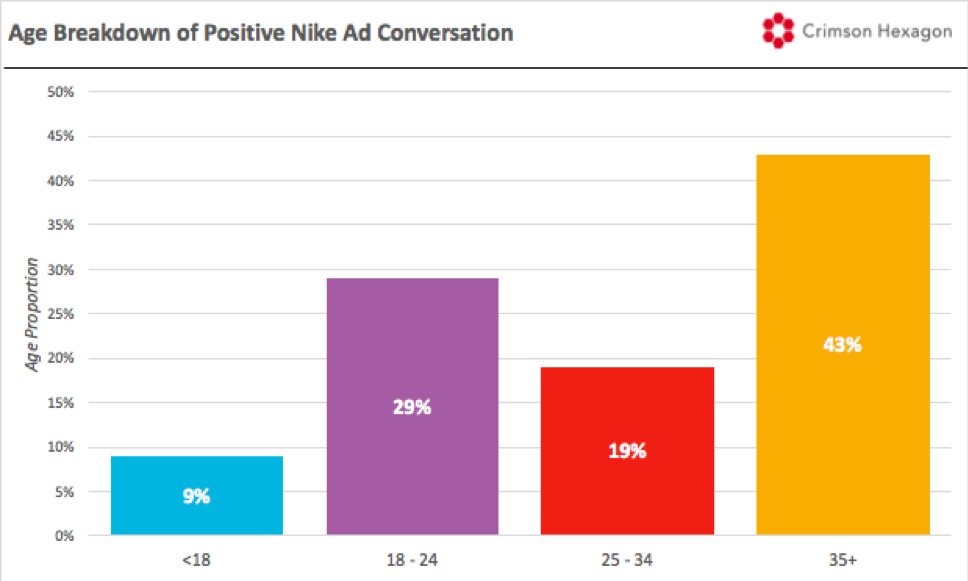 The age breakdown is slightly different than in Nike’s overall audience, but compared to those posting negatively about the ad (below), the positive group is much younger. The negative group, conversely, has very different interests than Nike’s core audience. 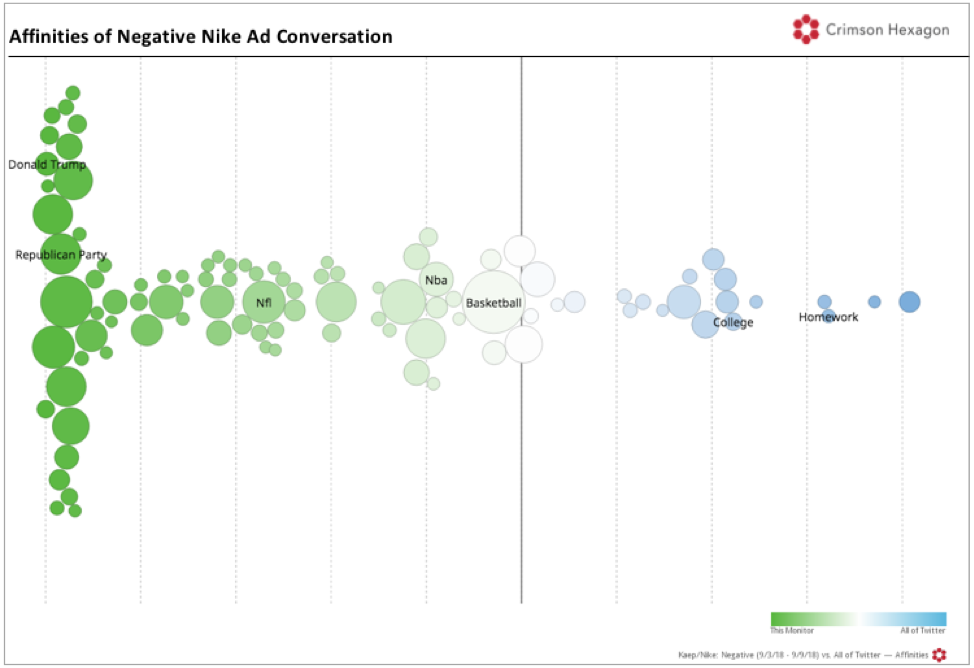 Those tweeting negatively about the ad have a strong affinity for the Republican Party and Donald Trump. The group has no interest in homework or college. In the end, Nike isn’t as concerned about angering this group of people because they aren’t the brand’s core customers. 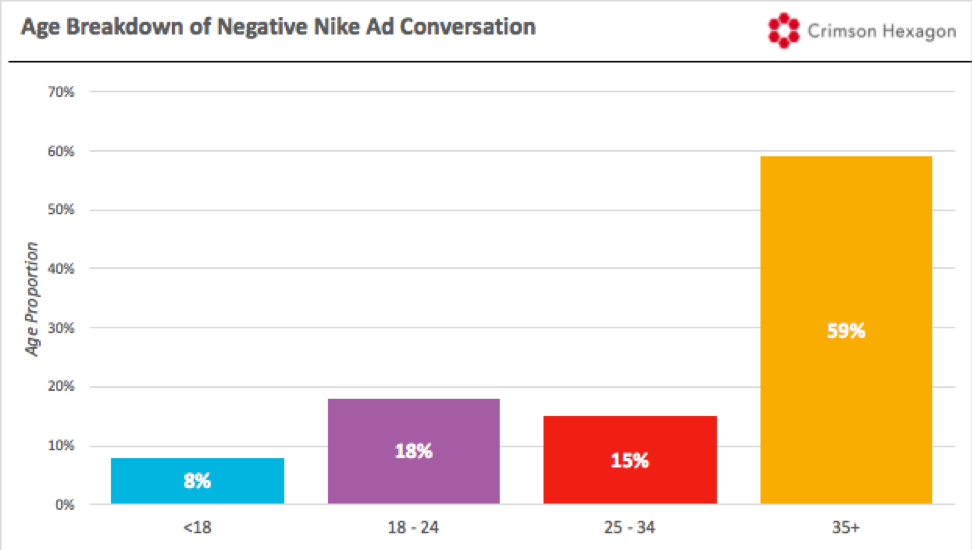 Nike knew that a social justice advertisement would land favorability with a younger, more progressive crowd. They certainly knew that was the audience that they sell to most. Market directly to them, and what do you get? A 30 percent increase in sales following the release of the advertisement.

Related: Amidst Controversy, Should Brands Distance Themselves From Facebook Advertising? 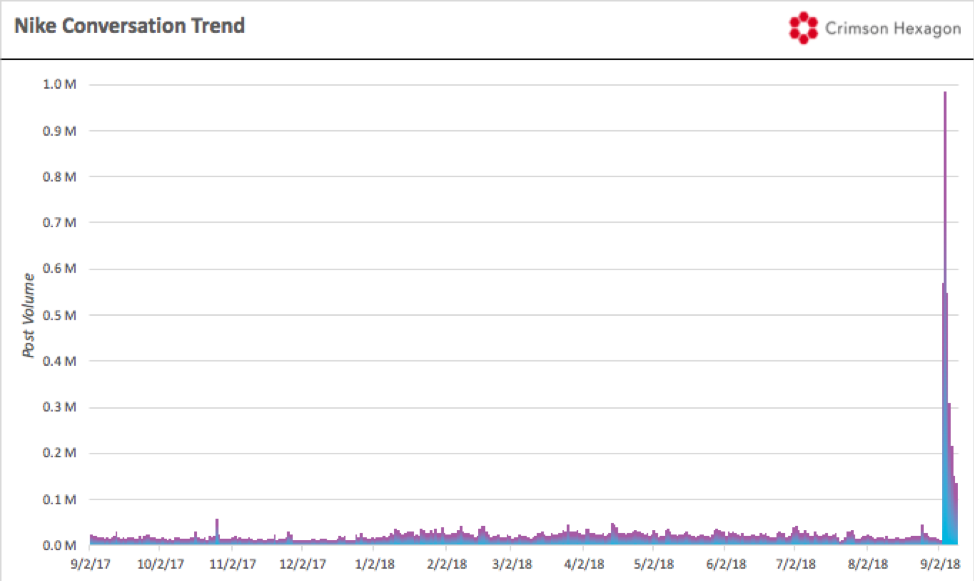 And that wasn’t the only area where Nike won. Not only did their sales skyrocket, but their social volume did as well. Typically experiencing about 20,000 posts per day over the last year, Nike saw almost 50 times that the day the ad was released. Almost 1 million posts in that day alone off of the ad is enough to warrant the money they were paying Kaepernick to feature in it.

Nike did everything right with this ad. They understood their audience and they created a masterful advertisement for them. They had been paying Kaepernick for a long time, waiting for the right time to utilize him, and they picked the perfect moment.